TV news: World Health Organization says wireless is a cancer risk just like lead, engine exhaust, and chloroform. Newscasters recognize our kids are at risk on wireless iPads in school.

This is one of the best TV news coverage on wireless risks for children. I apologize for the ad, but the video is worth waiting for. The commentary by the newscasters is great. Watch till the end, and hopefully the video won’t be changed or removed. Already the script has a disclaimer by the school system. This video from FOX5 Vegas KVVU is no longer available.

The Australian Radiation Protection and Nuclear Safety Agency (ARPANSA) published  a Fact Sheet on how to reduce exposure to wireless radiation devices.

This video by Wifi in Schools Australia reviews ARPANSA’s advice, explains SAR values, tests iPads vs. iPhones, and tells how to reduce exposure from mobile and other wireless devices.

Cell Phone Use Not Just Dangerous for Drivers, Study Finds

More than 1,500 pedestrians were estimated to be treated in emergency rooms in 2010 for injuries related to using a cell phone while walking, according to a new nationwide study.

The number of such injuries has more than doubled since 2005, even though the total number of pedestrian injuries dropped during that time.  Researchers believe that the actual number of injured pedestrians is actually much higher than these results suggest.

“If current trends continue, I wouldn’t be surprised if the number of injuries to pedestrians caused by cell phones doubles again between 2010 and 2015,” said Jack Nasar, co-author of the study and professor of city and regional planning at Ohio State University.  Nasar conducted the study with Derek Troyer, a former graduate student at Ohio State.  It appears in the August 2013 issue of the journal Accident Analysis and Prevention.

The researchers used data from the National Electronic Injury Surveillance System, a database maintained by the U.S. Consumer Products Safety Commission (CPSC), which samples injury reports from 100 hospitals around the country.  They examined data for seven years (from 2004 to 2010) involving injuries related to cell phone use for pedestrians in public areas.

Nasar said a more accurate count of injuries to walkers might come from comparing distracted walking to distracted driving, which has been much more heavily studied.  If the pedestrian numbers are similar to those for drivers, then there may have been about 2 million pedestrian injuries related to mobile phone use in 2010.

“It is impossible to say whether 2 million distracted pedestrians are really injured each year.  But I think it is safe to say that the numbers we have are much lower than what is really happening,” Nasar said.

As might be expected, young people are the most likely to be injured by distracted walking.  The 21- to 25-year-old age group led the way, with 1,003 total injuries during the seven years covered by this study.  The 16- to 20-year-olds were not far behind, with 985 total injuries.

“As more people get cell phones and spend more time using them, the number of injuries is likely to increase as well. Now people are playing games and using social media on their phones too,” he said.

Nasar said he believes the best way to reverse these numbers is to start changing norms for cell phone use in our society.  And that starts with parents.  “Parents already teach their children to look both ways when crossing the street.  They should also teach them to put away their cell phone when walking, particularly when crossing a street.” 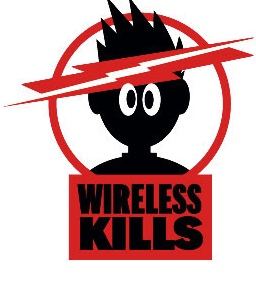 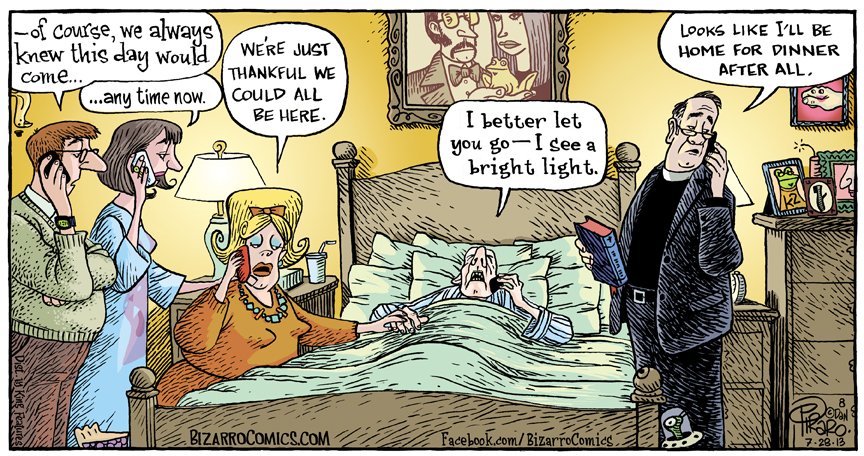 Last Words, Sunday’s Bizarro by Dan Piraro is a hilarious cartoon on how our culture is so obsessed with cell phones.  He writes, “I have not one shred of doubt that this scene, or something quite like it, is playing out all over the world at this very moment.”