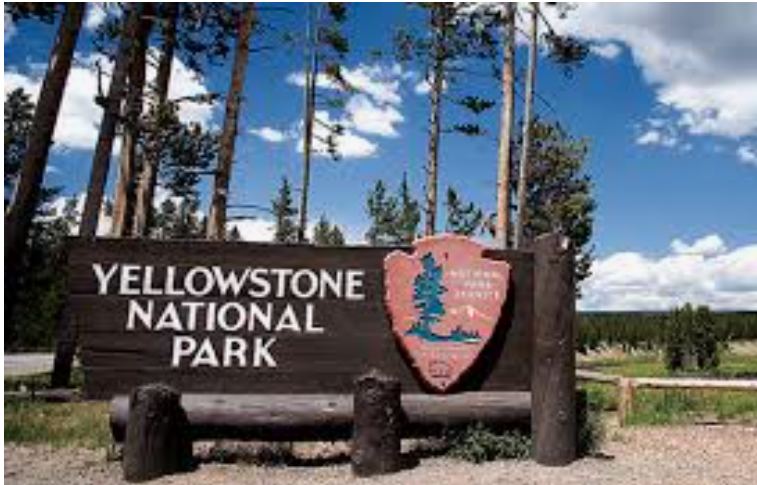 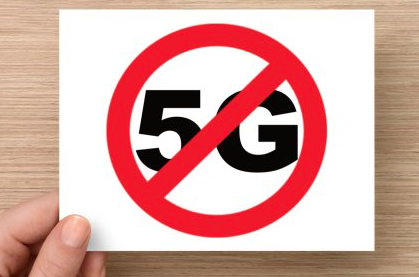 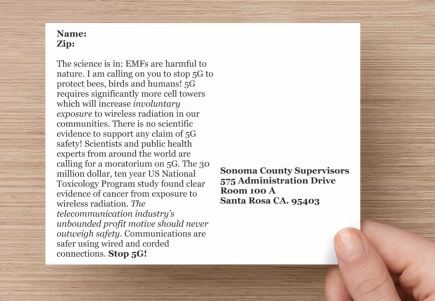 Deadline for this project is now open.

The science is in:  EMFs are harmful. I am calling on you to stop 5G to protect bees, birds and humans! 5G will greatly increase involuntary exposure to wireless radiation in our communities with cell towers planned for every other block. There is no scientific evidence to support any claim of 5G safety! (1) Scientists and public health experts from around the world are calling for a moratorium on 5G.(2)

In 2018 Newsweek reported: “Technology is quite literally destroying nature, with a new report further confirming that electromagnetic radiation from power lines and cell towers can disorientate birds and insects and destroy plant health. The paper warns that as nations switch to 5G this threat could increase.” (3)

5G isn’t an upgrade, it’s a massive increase in wireless radiation exposure. On Wednesday May 15, EMF Safety Network will be holding a protest in Sebastopol and a rally in San Rafael California. We are joining the actions of groups across the country to peacefully protest 5G and call for a moratorium to protect public health, children and nature.

In Sebastopol we will meet on the four corners of Hwy 12 and 116 (south) in the heart of downtown from noon to 1pm to protest 5G. Bring your own sign or find signs here: https://www.americansforresponsibletech.org/signs You can click on any of the signs to download a full size (18 X 24) PDF file ready to be taken to any local print shop for printing. Please note rain may cancel this protest.

Vicki Sievers, co-organizer of the rally writes,“You will hear Marin physicians who are alarmed about 2G-3G-4G effects on the health of their patients. 5G is bringing them out of their offices to focus our attention on this newer threat to the well-being of our children. The director of the California Brain Tumor Association and the co-director of Marin’s Ecological Options Network will also speak.”

Peer-reviewed published studies show that long-term exposure to wireless microwave radiation causes biological harm. The radiation overwhelms the body’s chemical and electrical systems, leading to serious medical issues that range from neurological problems to cancer. Children are more vulnerable to these effects as their physiology is still developing.

Our children have a right to play in their yards and sleep in their beds without being subject to constant, involuntary exposure to microwave radiation that could harm their health. We have an obligation to protect them.

Dr. Ronald Powell, PhD: “5G would irradiate everyone, including those most vulnerable to harm from radio-frequency radiation: pregnant women, unborn children, young children, teenagers, men of reproductive age, the elderly, the disabled and the chronically ill.”

What are EMFs brochures and 5G fact sheets and other information will be handed out at both events.

See www.5Gcrisis.com for information on other protest locations. Thanks to Americans for Responsible Technology who have organized this National day of Action. See https://www.americansforresponsibletech.org/day-of-action for talking points and more.

From Project Censored: The popularity and widespread use of wireless technologies has spawned a telecommunications revolution with increasing public exposure to broader and higher frequencies of the electro-magnetic spectrum as we transmit data through a variety of devices. The Telecom industry is promoting the replacement of our current cellular network, 4G (fourth generation) with a new generation of shorter high frequency 5G wavelengths to power the “Internet of Things” (IoT).   The IoT promises faster data processing, amazing new gadgets and a lifestyle that mirrors science fiction. However, 5G will require a massive telecommunications network with many more cell towers—resulting in wireless antennas every few feet, greater radiofrequency radiation (RFR) and increasing concerns about health.

Because this is the first generation to have cradle-to-grave lifespan exposure to this level of man-made microwave radiofrequencies, it will be years or decades before the true health consequences are known. There are still many questions about the safety of RFR in 2G, 3G and 4G wireless technologies. Informed health experts strongly recommend precaution in the roll out of 5G tech.

RFR exposure has been classified as a potential 2B carcinogen according to the World Health Organization’s International Agency for Research on Cancer. Research showed that the use of mobile phones could lead to specific brain tumors. Other studies have concluded that RFR exposure has been associated with DNA breaks (related to cancer), oxidative damage (leads to tissue deterioration and premature aging), disruption of cell metabolism, increased blood-brain barrier permeability, melatonin reduction (can lead to insomnia), and many others.

5G technologies are far less studied for human effects. The addition of this 5G radiation to an already complex mix of lower frequencies, will likely contribute to  negative public health outcomes—both physically and mentally. The new 5G technology utilizes high-frequency millimeter waves (MMW), which give off the same dose of radiation as airport scanners. Continuous exposure in close proximity to people’s homes and workplaces may pose serious risks.

Dr. Yael Stein of Jerusalem’s Hebrew University is a strong critic of the new 5G network. He notes the adverse effects MMW have on human skin—causing pain receptors to flare up. The Department of Defense (DoD) uses MMW in a crowd-dispersal device that makes the skin feel like it’s burning.

5G technology is not only bad for humans, it harms plant and animal life as well. One study found low-intensity MMW cause “peroxidase isoenzyme spectrum changes,” which damages cells. The 5G infrastructure would also pose a threat to our planet’s atmosphere. The implementation of this massive telecom network will require the deployment of many, short-lifespan satellites propelled by hydrocarbon rocket engines. One study states: launching these rockets will produce enough atmospheric carbon to pollute global atmospheric conditions, affect temperature and the ozone.

There is little or no corporate media coverage, of specific 5G health concerns. One CBS news article, May 29, 2018, noted general health concerns about the increased proximity and scope of the proposed 5G infrastructure (300,000 new antennas), yet they, and other corporate articles focus more on the proposed benefits of 5G: faster data speeds, 3D imaging, investment opportunities, etc. Corporate media also defer to telecom industry and federal officials to answer health questions; who typically say radiation exposure is minimal and RFR devices are safe.

Jody McCutcheon, “Frightening Frequencies: The Dangers of 5G and What You Can Do About Them,” Eluxe Magazine, May 2018, https://eluxemagazine.com/magazine/dangers-of-5g.

Nicole Karlis, “Why Public Health Experts are Worried about 5G, The Next Generation of Cell Network,” Salon, December 4, 2018, www.salon.com/2018/12/03/why-public-health-experts-are-worried-about-5g-the-next-generation-of-cell-network.