In April 2010 the EMF Safety Network filed a CPUC application on smart meters. We asked for a moratorium, an independent technical review, evidentiary hearings on health and safety, and the right to opt out.

In December 2010 CPUC President Michael Peevey approved PG&E’s motion to dismiss our application.  He stated “I believe that relying on the FCC in this case is reasonable, prudent and fully consistent with our responsibilities to provide safe and reliable electric service to ratepayers.” He concluded his statements by stating, “You should take these concerns to the FCC, it’s the proper body.”

Nearly five years later 65,000 emails between PG&E and the CPUC have been publicly released. Emails reveal the collusion between CPUC and PG&E. They discussed the smart meter problems privately, violating their own rules of procedure.

In September 2010 Peevey emailed PG&E’s Brian Cherry on smart meters.  He did not say he thought we should take the issue to the FCC.

Peevey believed people were suffering from smart meters.  He believed PG&E should do something about it. However, instead of regulating the utility to ensure public safety,  he deferred his lawful responsibility to PG&E.

Michael Peevey wrote, “One thought for the company: If it were my decision I would let anyone who wants to keep their old meter keep it, if they claim they suffer from EMF and/or related electronic-related illnesses and they can produce a doctor’s letter saying so (or expressing concern about the likelihood of suffering same). I would institute such a policy quietly and solely on an individual basis. There really are people who feel pain, etc., related to EMF,etc., and rather than have them becoming hysterical, etc., I would quietly leave them alone. Kick it around. And, it sounds like the company may already have taken this step, based on a couple of the comments at yesterday’s public hearing.

He writes, “If it were my decision”.  As the Commissioner assigned to the proceeding- it was HIS decision. Yet, Peevey defers his lawful duty to PG&E.  And he delayed on this case for years.

Peevey wanted PG&E to keep it quiet– didn’t want other customers, or the rest of the world to know there’s a problem with smart meters causing customers pain, etc. 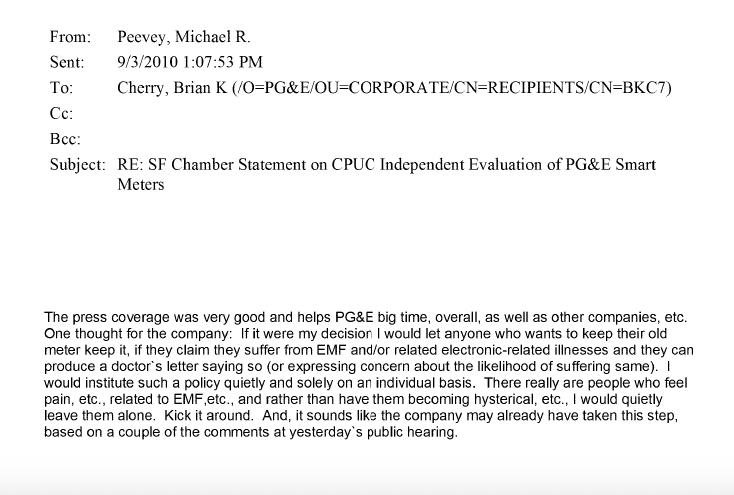