There is a major push all over the country to install LED streetlights based on assumptions of saving energy and money.  In places where the LEDs have been installed there are so many complaints.  On February 16 Sebastopol will consider whether or not to allow PG&E to install the LED streetlights.  PG&E owns the streetlights and requires cities to opt-in to the changeout.

PG&E is currently installing LED streetlights in Santa Rosa, and we took a team to investigate, measure and photograph there.  What we found is, unlike the warm yellow streetlights, the LED’s are very white, with cold blue tones, and painfully bright.

Mary Carvalho who lives in Santa Rosa writes, “Has anyone noticed lately that the night sky is lit up like a full moon every night?”

Paul Marantz, a lighting designer said about the yellow streetlights, “there was a warmth about them that’s missing from the new lights. And because of the way the LEDs are designed, it’s a much more directed light, with more glare.”

When the environment is saturated with blue rich light it causes melatonin reduction which can affect sleep. Harvard Medical School reported blue light has a dark side.  “Light at night is bad for your health, and exposure to blue light emitted by electronics and energy-efficient lightbulbs may be especially so.”

Bob Parks, executive director of the International Dark-Sky Association states, “Now, people can certainly close their blinds and block-out that rich blue-white light. The problem is that every other species on the planet can’t do that, so you have an impact on everything else. And not just animals — we are talking plants, trees, right down to one-cell organisms.”- Earth Island Journal

The Department of Energy (DOE) and IEEE reported there are serious health risks from LEDs if inexpensive drivers are used.  DOE writes, “Why is flicker bad? For one thing, in addition to being annoying and distracting, it can cause eyestrain, blurred vision, and impairment of performance on sight-related tasks. And in those who are flicker-sensitive, it can cause debilitating headaches and migraines — 10% of the population is estimated to suffer from migraines, and that’s only one of the groups prone to flicker sensitivity.  According to the IEEE recommended practice, flicker has been reported to contribute to autistic behaviors, and can be a trigger for epileptic seizures.… Some of these problems might occur even when the flicker isn’t detectable by the eye.”

The EMF Safety Network sent a list of questions to PG&E about their LED streetlights. We await their answers.  We can trust PG&E will cut costs and we can’t be certain they will tell the public the truth.  We don’t know whether or not PG&E will be using the streetlights for wireless transmissions, as has been done in Los Angeles and Florida.  The California Public Utilities Commission (CPUC) had a presentation on their website that touted the benefits of “intelligent” wireless streetlights. 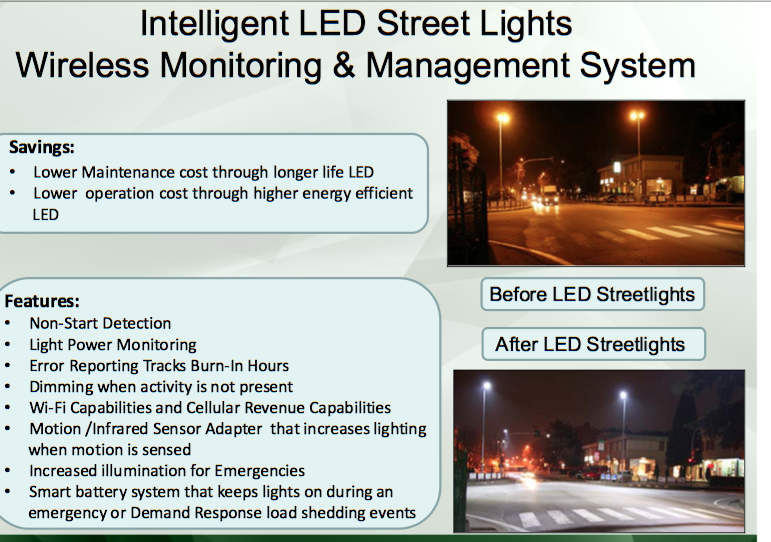 We don’t know if PG&E is installing these, but we do know the rapid increase of microwave technologies deployed on our homes and in our neighborhoods, largely without informed consent, threatens privacy, public health, children, wildlife and nature.

The other risk is whether or not the LED streetlights add unintentional radiation to the power lines, creating “dirty electricity” like PG&E smart meters do.  Samuel Milham, MD and David Stetzer, Electrical Engineer wrote a peer reviewed published paper in 2013.  They wrote, “Dirty electricity, also called electrical pollution, is high-frequency voltage transients riding along the 50 or 60 Hz electricity provided by the electric utilities… has been associated with cancer, diabetes and attention deficit hyperactivity disorder in humans.

Some people claim brighter streetlights will help reduce crime. However, Earth Island Journal reported “Public safety was a big motivator behind the Oakland conversion project, and it may seem intuitive that brighter lights improve safety.  However, some studies suggest that though brighter streets make people feel safer, they have no impact on actual crime levels.”

In 2015, PG&E’s claims of LED cost and energy savings were merely assumptions.  In the CPUC 2015 Uncertain List they stated, “market move to LED technology requires verification.”  As yet PG&E has offered no proof.  In addition the city claimed the streetlight conversion would be free, however PG&E intends to recover streetlight costs through customers rate increases. So we all pay for the LED streetlights.

Why should perfectly good streetlights be scrapped for a risky technology whose benefits are questionable? A study published in late 2010 in the journal Environmental Science and Technology found that LEDs contain lead, arsenic and a dozen other potentially dangerous substances.  While it is possible that the LED’s save energy, it’s not worth the cost to public and environmental health.

In September 2015, the Sebastopol city council had the PG&E streetlight conversion on their consent calendar.  Due to complaints, they took the issue off consent and put it on the regular agenda. At that meeting, Rich Emig, Public Works superintendent, gave a report acknowledging the LED health risks. Public comments included one woman who said when she was a child she had seizures from light flicker. See the Sebastopol City Council’s video which starts at 1:40:00

Considering the city acknowledged the serious pubic health risks, why are they bringing it back to the council, and why have they not notified the public of this issue that will affect each and everyone of us?

What LED light pollution looks like from space
http://www.techinsider.io/astonauts-photos-from-space-leds-light-pollution-2016-1

Ann Arbor Michigan has been a leader in converting city streetlights to energy-efficient LEDs, but despite a large reduction in energy usage, DTE Energy is proposing rate increases for LED lights, while decreasing rates for conventional high-pressure sodium lights. http://www.mlive.com/news/ann-arbor/index.ssf/2015/02/ann_arbor_responds_to_streetli.html

Darkness is a requisite part of life.
“Half of your life, half of the lives of all nature, half of all human history has occurred between sunset and sunrise.  We and all of the natural kingdom have evolved in a landscape that segues from a bright blessed day to a dark sacred night.  A dark night is really that–sacred.  Every cell in the human body has time-related functions, part of the bigger circadian system.  I’m referring to science, not some woo-woo feel-good incense-laden chanting mysticism.  Healthy life depends on critical functions for which the absence of light is essential.”

1.  All outdoor lighting shall be full cutoff, or fully shielded.
2.  If LED lights are used, they shall have a correlated color temperature (CCT) less than 3000K.
3.  All lights shall minimize glare, sky glow, and light trespass. —–Excerpt and recommendations from www.Nightwise.org

The city of Davis received so many complaints about the LED lights they put the project on hold for a year, then spent $350,000 more money on the project. http://sacramento.cbslocal.com/2014/10/21/davis-will-spend-350000-to-replace-led-lights-after-neighbor-complaints/

Houston, we’ve got a problem with LEDS.  ​​http://www.houstonpublicmedia.org/articles/news/2016/02/08/136878/city-waiting-for-more-information-on-alternative-led-street-lights-as-some-call-for-change/

16 thoughts on “The perils of LED streetlights”