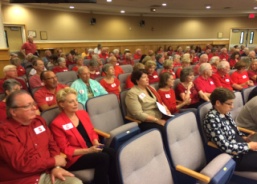 VENICE, Fla. – Leaders of a coalition of Venice community groups against a proposed cell tower say they’re encouraged that the Sarasota County Planning Commission voted unanimously to deny a zoning exception for a 125-foot cell tower.  The tower was planned to be built on residential land in the Plantation Golf and Country Club community.   The tower would be visible to hundreds of residents in the neighboring Lake of the Woods of Jacaranda development.

The vote was taken at a public hearing attended by more than 100 residents of the two communities. Residents opposed to the tower wore red to show their disapproval. More than 20 residents spoke at the hearing in opposition to the tower.

Doug Barkley, chair of Stop Tower on Plantation, said, “A dedicated group of property owners has worked for a year to assure that a commercial cell tower was not constructed in the middle of their communities. The recommendation by the Planning Commission to deny the exception to land use creates faith in the integrity of the zoning system and the protection that it offers to property owners.”

A hearing before the Sarasota County Board of Commissioners is set for Tuesday, January 12th. The Planning Commission hearing may be viewed online at the following URL:
http://sarasotacounty.granicus.com/MediaPlayer.php?view_id=15&clip_id=3196