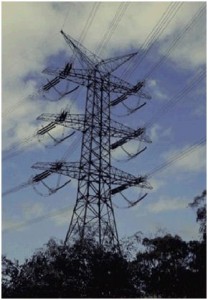 Open Letter from the City of Chino Hills to:

I write this letter on behalf of the City of Chino Hills, as our community is witnessing the invasion of 198-foot tubular steel poles erected through the heart of our City. These iron giants are massive beyond our worst expectations and tower over our neighborhoods; permanently and irrevocably impacting 1,000 families’ homes, churches, parks, and public facilities. We dread the additional looming impacts when the poles will be strung with six extremely high voltage lines.

We are outraged, disgusted, and disheartened over the California Public Utilities Commission’s (CPUC) cavalier dismissal of our community during the Tehachapi Renewable Transmission Project’s review process. Our message to Californians… “Beware!” Southern California Edison, hiding under the cloak of delivering politically correct “green energy,” can get the CPUC’s approval to build anything on their existing rights-of-way with complete disregard for people impacted along the way and even disregard for their own standards. Our entire community is permanently disfigured by the CPUC’s decision.

This damage can never be mitigated. The reality for many families is that their children will grow up, playing in their own yards, under these massive double-circuit 500 kV power lines buzzing and crackling as their parents wonder if the proximity of their own backyards to these power lines will someday prove harmful to them. Most will be unable to sell their homes as they watch the value drop in an already depressed market. Unable to walk away from their homes, which represent their biggest investment, these families will suffer from the stress of this fear forever.

Families did choose to live next to a normal neighborhood 220 kV SCE transmission line, de-energized for nearly 40 years. Never did anyone expect that a CPUC review process would allow the construction of poles that climb to nearly 200 feet in a 150-foot easement, much less that they would be approved to carry double-circuit 500 kV power lines – a level of energy unheard of in residential neighborhoods throughout the entire United States. And SCE says “the residents knew the easement was there”. Talk about misleading.

The CPUC’s mission is to”regulate privately-owned electric companies and serve the public interest by protecting consumers and ensuring the provision of safe, reliable utility service and infrastructure at reasonable rates, with a commitment to environmental enhancement and a healthy California economy.” Clearly, the CPUC has abused its vast and unchecked regulatory powers by allowing SCE to construct the massive infrastructure which permanently alters our community’s way of life and damages our families.

In recent TV coverage, KABC Channel 7 reported,”The California Public Utilities Commission sided with SoCal Edison, saying in a statement that “there are overriding statewide values which outweigh the community values of Chino Hills:’

How clear is that statement from the CPUC? Very clear. For the record, the City of Chino Hills never opposed this renewable energy project. Instead we developed a RESPONSIBLE alternate proposal that would reduce the impact on our residents while allowing SCE to move forward to meet renewable energy mandates.

If the CPUC remained true to its mission, this route through the City of Chino Hills would have been deemed unsuitable due to its significant health and safety impacts. A legitimate review process would have eliminated the route through Chino Hills and required SCE to develop a viable alternative that would not harm existing residents. Instead, our City spent $2.4 million to identify and design a viable alternative that had the support of environmentalists. The CPUC should have required SCE to do so. During the hearings and testimony, we witnessed the relationship between the SCE executives and CPUC Commissioners and staff. What is now clear is that our small City, with limited resources, likely could never prevail against SCE, a giant corporate entity with vast rate-payer funded resources and close friends at the CPUC. The path of least resistance is not always the right path.

This SCE project represents the height of corporate irresponsibility and it has been blessed by the CPUC. I believe that it is time to evaluate the CPUC’s relationships with the public utilities and their effectiveness in regulating these utilities, which they are supposed to do on behalf of the people of California.

Californians beware…..your community may be next. Sincerely,