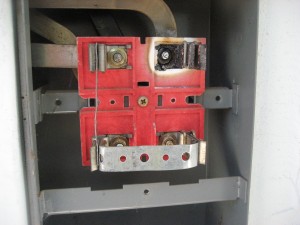 The following letter and photo were sent to the EMF Safety Network from a California fire department captain (Ross) who saved his home from a potential Smart Meter fire in 2009.  PG&E has admitted that Smart Meters have interfered with GFI’s and AFCI’s, but they have not admitted to any connection with a Smart Meter fire.

I was at home doing yard work in the late afternoon when my wife came outside and told me that “half the power was off again”. This had been happening on and off for about two weeks and it kept happening when I was at work. This was the first time I got a look at what was happening. It was a hot day and the AC was on. The power went off when my wife turned on the stove.

I then went into my garage and check my fuses. As I opened the door from the house to my garage I could smell burnt electrical smoke. I then rushed over to the fuse box but immediately determined that it was not the source.

I then went out side to where my meter was and I could instantly smell the burnt electrical smoke. As I was looking at the meter I inadvertently placed my hand on the meter itself and almost burned my hand. The meter was so hot you could not touch it. I then went back into my garage and felt the wall area where the meter comes in contact with my home. The wall was also very warm. Being the firefighter I am, I began to remove the sheetrock from the wall to check if I had a wall fire. There was no wall fire but the metal box into which all the homes wiring from the meter is stored was also too hot to touch with a bare hand.

At this point I called my father-in-law who is an electrician to come over and have a look. When he showed up, I told him what was going on and when he touched the meter a look of amazement came over his face and he stated ” This isn’t supposed to be this hot, we need to kill the power”.

At that point we shut the power off to my house and called the PG&E emergency line due to the fact it was a Friday evening.

PG&E sent out a service truck. When they arrived the gentleman walked up we explained what was going on and he asked “When was your Smartmeter installed” I told him ” About two weeks ago”. That when a light went off in my head.

When he went to pull the meter, it was still to hot to touch and the PG&E service worker had to put gloves on, even though the power had been off for approx one hour.

As son as he pulled the meter we could see what had happened. The receiving clips for the meter were burnt.  He then asked ” Did your power go off when the AC kicked on?” I said ” No my power went off when my wife turned on the stove to cook dinner”

He then said ” That makes sense, the burnt area is where your 220v goes into your house, you’re lucky it didn’t start a fire”

I then asked ” How did this happen?’

He then proceeded to tell me that they were having nothing but problems with the contractor who was installing the meters and that it was costing PG&E more money to follow the contractors through each neighborhood and fix the problems they were causing and that the reason they did this is that PG&E didn’t want to pay its own workers wages and wanted a cheaper price.

As you could imagine I was shocked at this admission.

He then went on, telling me that the burnt area was more than likely due to the contractors not being able to fit the new Smartmeter into place, so the widened the receiving clip and shoved it into place. By them widening the clips, the caused an area of no contact which then caused arcing every time we used and appliance with 220v.

What he said next then floored me.

He said ” Well you need a whole new box and there is no way we can repair it tonight. Technically you own the box and we would tell you to hire an electrician to fix it. PG&E own thee lines underground and everything up to the meter. Because this is behind the meter, technically its all on you”

At that point I almost blew my lid but then he said ” I am writing this up as a bad install by the contractor. I am tired of following those guys around and fixing their problems because it’s not right. I’m going to make them pay for it and hire an outside electrician to do it.” I was relieved at that point.

He then kept telling us more and more about all the problems and how this company only gave these people installing the meters two days of training and were hiring people who were not electricians. He also told us about injuries to contact employees were receiving due to lack of training.

At that point he said ” here is what I’m going to do for you. We are not going to be able to rebuild this until Monday, but I will bypass the 220v so you can use your basics, you just wont be able to do laundry or have no AC.”

He then alluded to the fact he wasn’t supposed to bypass the220v but he did it for us anyways.

Come Monday, the third party electrician showed up at my home to repair my box. He asked what happened and I told him, he then says ” This isn’t the first box I have had to fix because of those guys” meaning the contractors.

The pic you see [is] of the burnt area where the 220v went into the house.  Also you see the strips of metal in the other clips, this is where the PG & E service worker bypassed the 220v so I could at least have 110v for the weekend.