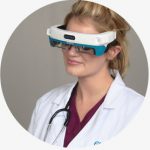 2 thoughts on “Drunk Doctors? Why Wireless Headsets May be a Bad Idea for Patient Care and Doctors’ Health”