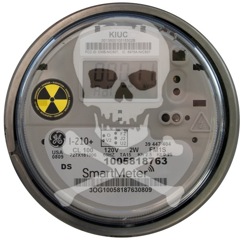 PG&E has handed over another batch of emails that expose days long meetings between PGE’s Brian Cherry and CPUC president Michael Peevey.   Peevey provides information, direction and advocacy on utility projects, instead of regulating PG&E to protect the public to ensure safe utility service.

The majority of the emails are about Oakley Power Plant, a windmill project called Manzana and San Bruno.  However one small section gives a peek into Michael Peevey’s intentions on smart meters.

“SmartMeters-Mike grumbled about the CCSF PFM* and the folks in Sebastopol who want to delay SmartMeter implementation. He implied that this wasn’t going to happen and that by the time the Commission got around to acting on it, we would have installed all of our meters.”

The “folks in Sebastopol” are the EMF Safety Network.  We had a formal proceeding before the Commission in 2010 asking for a moratorium on smart meters.  A.10-04-018. President Peevey dismissed that proceeding deferring authority to the FCC. * CCSF is the City and County of San Francisco who asked for a moratorium, and illustrated smart meter problems. http://docs.cpuc.ca.gov/PublishedDocs/EFILE/PM/119424.PDF

The Structure Report was issued two months after Cherry wrote about this, and its conclusions were the same as Cherry reported, smart meters were claimed to be accurate, and PGE was faulted for how they handled smart meter problems.

Peevey has done exactly what Brian Cherry said he implied.  Peevey dismissed and ignored the substantive issues, created a pay to opt out program, and delayed… meanwhile PGE installed almost all their  smart meters.  The utilities forced smart meters onto property without consent and without honest disclosure of how the meters work.

Wasn’t that just our experience?

Tearing down signs, and installing ahead of schedule!

CPUC ignoring cities and counties requests for a moratorium and safety studies!

Excluding health and safety from the smart meter opt out proceeding!

More from the email:

“He [Peevey] was concerned about the Structure SmartMeter Audit.  He said he could not go into details, but that we would like their conclusions on the viability of the technology and infrastructure that supports it. He did say the Structure Audit report would be very critical of the way we handled the problem and communicated with our customers. He was also highly critical of Helen and her handling of the Senate hearing in Sacramento.”

“Miscellaneous- Mike couldn’t hide his disdain for Mark Toney and TuRN. He was particularly incensed, along with Clanon, about TURN’s refusal to modify their website about opposition to Smart Meters.  I’m not too concerned about TURN and the GRC at this point. I don’t believe we need them as a settlement partner with Peevey as the assigned Commissioner….”

This is the stuff of crooks!

One thought on “PG&E hands over even more emails”