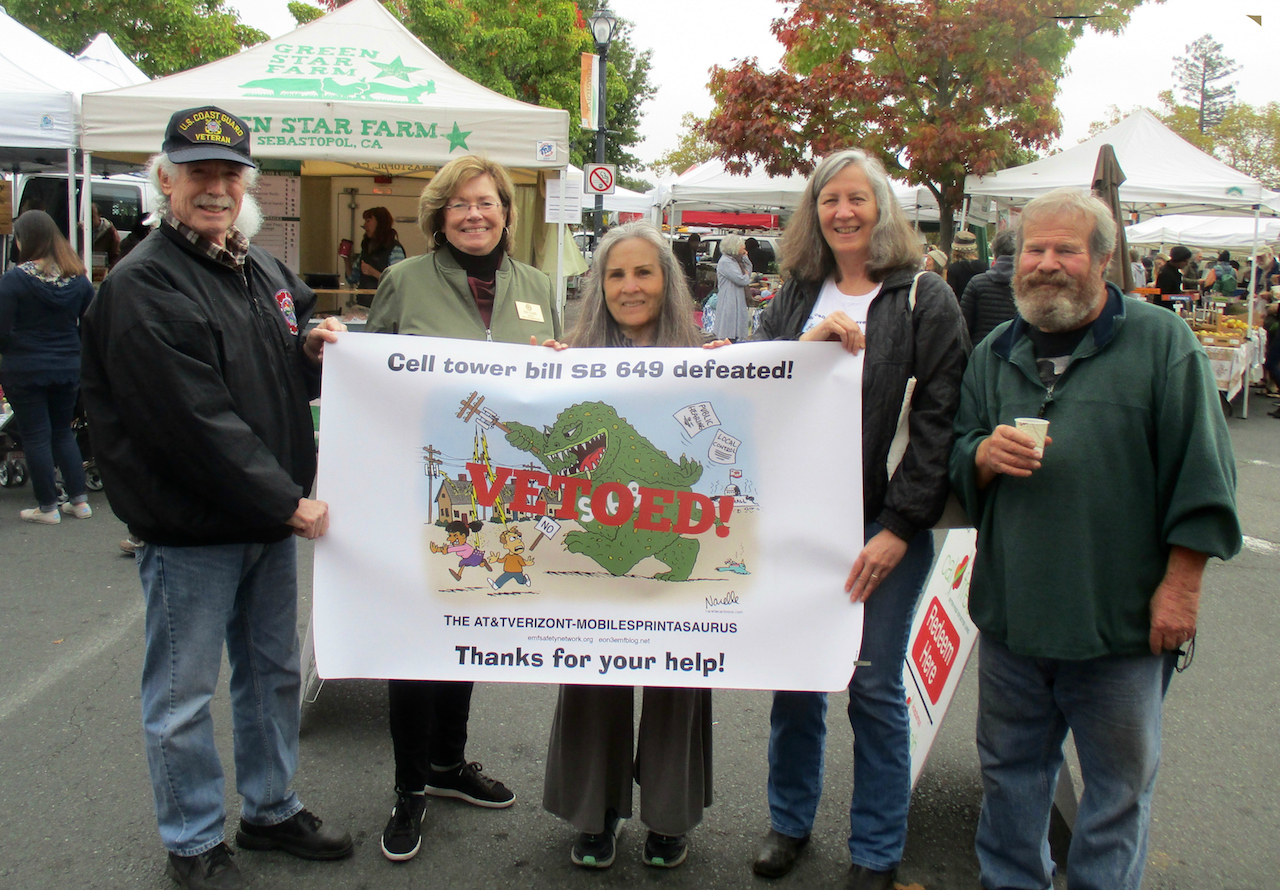 Sebastopol, Santa Rosa, and Sonoma County were among the 300 cities, 47 counties and over 100 organizations opposed to SB 649. Senator McGuire and Assemblyman Levine also opposed the bill.
The defeat of SB 649 was won by a consortium of organizations, especially the League of California Cities, RCRC representing Rural Counties, Best Best and Krieger, Environmental Working Group and the many organizations who opposed the bill.
As for our contributions, early on EMF Safety Network (EMFSN) partnered with Ecological Options Network (EON) and formally opposed SB 649 when it was first introduced in March, and re-introduced our opposition to the subsequent committees.
We were fortunate to have Environmental Working Group to guide us on how to oppose the bill. We created a letter template and brought in many groups to oppose SB 649.  We kept our list members informed via email, website, Facebook and Twitter. We gave people the science, tools, flyers and information on how to take action to oppose SB 649.
We lobbied with EON and other groups in Sacramento. In July we allied with Californians for Safer Technology who launched a media campaign, including radio ads, and hiring a union lobbyist.
In August EMFSN quantified the amount of opposition to SB 649 by analyzing multiple Committee Analysis, hearing videos, the League of CA Cities and RCRC opposition lists, and by calling and emailing a couple hundred CA cities and counties to inquire about their opposition. We raised the number of confirmed opposed to 300 cities, 47 counties and 110 organizations and used that information as a tool to educate.
With EON we hired artist Brian Narelle to design a cartoon to illustrate SB 649 as a warty cell tower wielding monster.
Finally EMFSN launched a postcard campaign to ask Governor Brown to veto SB 649. In less than three weeks we distributed 2500 postcards to activists throughout California and mailed another 500 postcards to the Governor from a sign- up form on our website.
We did all this from donations from members and supporters, all on a shoe string budget.
This veto of SB 649 is a very big victory for the thousands of people who took action. THANK YOU for your financial support, for your calls, letters, and the actions you took to stop SB 649.
In celebration, we took a victory lap around downtown Sebastopol carrying the banner of the VETOED SB649 monster and stopped to take a photo with the Sebastopol Mayor Una Glass.
Next steps.  As great as this victory is it could easily be wiped out in a matter of 2 months by Federal preemption bills.  In order to stop this we need to regroup and take aim at Congress to tell them to stop unlimited cell towers.
This week we will mail 543 postcards to Congress members to alert them to Governor Brown’s veto of SB 649. Next we’ll need to study the 41 pending Federal bills which are in some way related to the expansion of wireless. Then we will contact the sponsors of the bills and tell them why the promotion and expansion of wireless is harmful to people, and to the environment.
In order to do this we will need to raise funds for this campaign on Congress. Your donations helped EMFSN accomplish all our contributions listed above. Did anyone believe SB 649 could be stopped? Many people were skeptical- but we helped make it happen and we can do it again!
With your support we can defeat these bills and continue to raise the bar of awareness to reduce EMF in our communities.  Thank you!
http://emfsafetynetwork.org/donate-now/