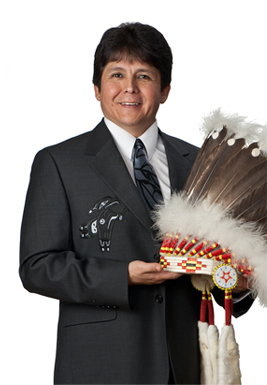 On behalf of the Osoyoos Indian Band, Chief Clarence Louie announced today that he and all Band Council members have signed a governing document prohibiting Fortis BC, the local utility company, from installing Smart Meters on the approximately 703 homes and businesses on the Osoyoos Indian Reserve.

“Having been presented with science-based evidence, the Band Council and I are convinced that Fortis’ proposed wireless smart meters in meshed-grid networks have potential to harm our children and our environment. No scientist on the planet has been able to verify the safety of these extremely dangerous devices that emit microwave radiation 24/7 in perpetuity and which cannot be turned off.”

“As Chief of the Osoyoos Indian band, my first duty is to protect my people, our future generations and our lands. For that reason, the Band Council and I believe we need to err on the side of caution and respect the world’s leading independent scientists who say – and have evidence to prove – that electromagnetic radiation, especially pulsed radio and microwave frequency radiation is harmful to all living things.”

“I am proud of our Council for standing up and voting to prohibit the installation of smart meters on our lands in order to protect not only our own people, but all the peoples who reside and work on the Osoyoos Indian Band lands.”

4 thoughts on “Osoyoos Indians ban smart meters from their land”