Wellington, a company contracted by PG&E, is installing Smart Meters in Sebastopol despite the fact that Sebastopol has asked for a moratorium twice; that Sebastopol council supports a Smart Meter community wide opt out; and that the CPUC has a proceeding pending to investigate the possibility of community opt-out. 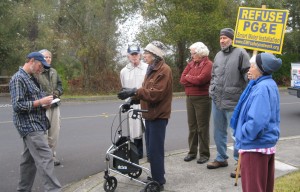 This morning residents at Burbank Heights and Orchards (senior housing community) and Sebastopol residents chased off an installer, who admitted he had only two weeks training and was not an electrical contractor, which is a requirement for FCC safety conditions. 83% of the residents there opposed the meters. As he was leaving he said  he was going to file a police report, and when I brought the camera out he got in his truck and left. http://youtu.be/nwSlB1y4p9k

Two more Wellington trucks installing gas smart meters were on Murphy Street. When I approached the two men they did not respond or answer any of questions.  They eventually packed up their stuff and left, putting the analog gas meter back together.

Smart Meter installers drive small white Wellington Ford Ranger trucks.  They are installing throughout Sebastopol now.  There were at least three trucks in town today.  It appears the installers have been instructed to vacate a scene if they are approached. They also seem to leave town if followed, rather than going to the next house to install.

Tomorrow night Tuesday Feb 5 at 6 pm is a council meeting at the Sebastopol teen center.  We can bring this issue up at public comments and see if they can take some action to ban the meters after all.