To whomever made this hilarious video, THANKS!

The cause of the fire is listed as equipment failure and arcing coming from the switchgear area, and transformer vault.

According to a Press Democrat article, Santa Rosa Battalion Chief Jack Piccinini described the scene as a “meltdown”.

EMF Safety Network has been informed that the electrical room was filled with Smart Meters, which have been reported to explode and catch fire in other areas, including Bakersfield, El Cerrito, Berkeley, Oregon, Virginia, Texas, Canada and New Zealand. Inspectors in Maine and Australia found thousands of homes were at risk for electrical hazards from Smart Meter installations.

PG&E has admitted Smart Meters have interfered with GFCI and AFCI’s, which are electrical devices designed to protect against fires and shocks.

“Smart Meters are dangerous and PG&E and the CPUC should act now to stop the installation” states Sandi Maurer, EMF Safety Network. 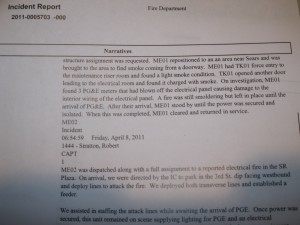